There is a posture to fine art that implies that it is only art if it is elevated to a place where few will see it, and even fewer will understand it. Art’s aura, as described by twentieth century cultural critic, Walter Benjamin, is the cult value and relative distance that make it unattainable. How does the fact that it seems just out of reach for most of us make it more valuable? And why does the value of art seem to be intrinsically tied to this inaccessibility, rarity and exotic nature?

The Audain Art Museum opened in March 2016 in Whistler’s Upper Village. This is a not-for-profit institution founded on major donations from Michael Audain and his wife Yoshiko Karasawa. The building, designed by Patkau Architects of Vancouver, takes delicious advantage of its forested location and mountainous “nest” with gorgeous views from its walkways. It boasts “one of the world’s most important collections of Northwest Coast masks”, two dozen Emily Carr works and a collection of impressive works by E.J. Hughes on loan from Jacques and Margaret Barbeau. I was able (I will avoid saying “privileged”, even though privilege was exactly what it was) to view the museum with a group under the guidance of Chief Curator, Darrin Martens on a recent Saturday. It is a relatively small, but impressive collection of about 200 works.

James Hart, The Dance Screen (The Scream, Too), detail. Photograph by Casey Hrynkow.

I came away with a feeling of discomfort that I am having trouble resolving. I have less of a problem with this new collection than I do with how it came to be collected and how and where it is being displayed. The works in the Audain Museum cover British Columbia art, from time immemorial to present day, within a narrow window of one collector’s tastes. Everything from Nuu-chah-nulth masks of well in excess of 100 years old, to works barely one year old, made by Rodney Graham. The majority of this collection most recently belonged to one family. They had the wealth and the knowledge to accumulate the works that are now the backbone of the Audain Museum. These pieces were kept in the the private homes and offices of a small group of people until the Audains decided to make this collection a legacy to the public. It is a noble gesture. And if I posit that one of the implied roles of the wealthy is sprinkling bits and pieces of their good fortune down to the common folk, then this is indeed a grand gesture. The ecology of art in western society runs on this top-down feeding of the system, and it also makes it less available to the rank and file. This particular museum is located an hour and a half by car from Vancouver, in Whistler, to be “found” by those who have a level of education that arouses them to seek it out, in a destination known for its expensive accommodations, restaurants and sporting pursuits. And, of course, there is an $18 admission fee to pay. This art is elevated by its inaccessibility, its rarity and its exotic nature. Some of it had been purchased directly from the artists, some (in the case of First Nations art) from other collectors who may originally have acquired it nefariously and then moved it up the value chain through barter and sale.

When we view this art we see it, consciously or unconsciously, through a lens coloured by perceptions of exoticism, rarity and wealth — perhaps even envy. This isn’t unique to the Audain Museum, but the choices that were made in this modern setting do nothing to turn the tide of elitism in art circles in our culture. The true accessibility of art in our society is a discussion worth having.

2. I decided to use that information to write a piece for our class blog called 57 things      about our field trip to Whistler. But then I googled artist Sonny Assu and realized there is no basis to the ‘57 things’ idea.  The piece is indeed representing the years the potlatch ban existed, but that was 1886-1951—67 years.  I counted the drums in my photo and that seems to be the number.  (67 is way too many things for a blog though.  Hence my title of 6 – 7). 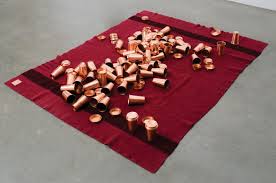 I remembered seeing it at Audain and looking around for the title and artist name and not finding it. It’s only now that I’ve googled Assu that I know it’s his.  Again, the 67 years of the potlatch ban are represented, this time by coffee cups (the status symbols of modern Vancouverites); they’re made of copper because that was a valuable material the Kwakwaka’wakw people used to share.  The cups have been abandoned on a Hudson’s Bay blanket that depicts the colonialism the Kwakwaka’wakw people were forced to endure.

4. When the curator was asked if the First Nations whose masks were displayed here had been consulted on how to display them, he said “I had no time to do that.” I could feel our entire class collectively wince at this answer.  The curator did, however, tell us that the museum makes time and space available for First Nations who want to borrow or use the masks that tell the story of their heritage.  Magnificent!   I want to assume the nations have been told that they can do that, and hope they borrow these pieces and share them if they find them meaningful.

5. The new First Nations masks by a variety of artists and the pieces made by Brian Jungen out of Nike Air Jordans and golf bags are a hopeful wonder. I saw there some of the same cheekiness we read about in Michael Yahgulanaas’s work and I want to see more.

It’s not First Nations art but it’s also not out of place here; old women wearing plaid blankets and plastic bags on their feet overload their wheelchair cart, and arguments could be made for themes of excess, and shame, and ignorance and relentless progress in this picture.  But the truth is I’m drawn in because I know Waddell.  We went to high school together and he was funny and smart.  Thirty years ago we went on a day long date to the PNE and then shared a kiss the night before I moved away to university and I never saw him again….

7…. and I think I was supposed to contact him when I came back to visit and I never did. I didn’t make time because I was a dumb teenager. So, while I apologize for this overly personal reflection and weighty metaphor, I will say this: as the Audain Art Museum curator stated, the role of art is to create a dialogue and to communicate.   It’s easy to fail and to let things slide since we’re all busy.  But learn the names of the pieces in your gallery and the pertinent information about them.  Make names of artists and art easy to find.  Open that dialogue with the nations whose masks are displayed at Audain.  Maybe you were too busy before. Start now.